I am excited to share some cool wrapping paper and a card that I made this week for my nephews 5th birthday. I love this idea of having an endless variety of personalised wrapping paper.

I bought some cheap brown paper on clearance after Christmas at a big chain store for $1 per roll which is 7m x 70cm wide. I bought 5 rolls and then went back and bought a few more cause I want to be able to do this for every gift I give. You can't probably get it that cheap at the moment but keep an eye out, lots of places do sell it and places like Ikea sell white paper on a role too. 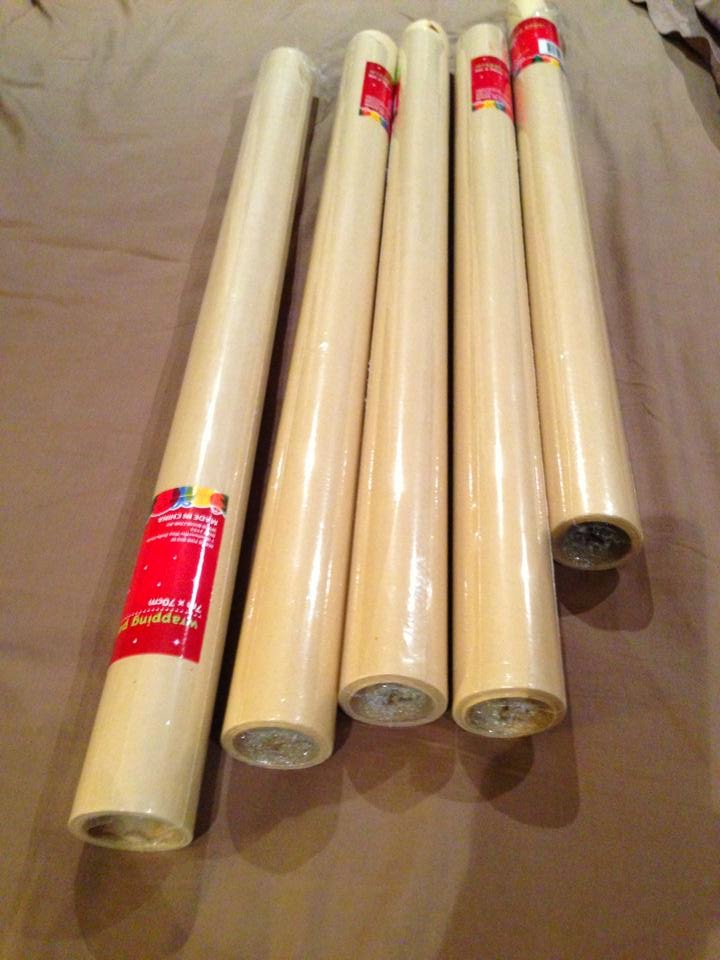 I decided to let my daughter (who is a mad keen stamper) do the wrapping paper while I worked on the card. I set her up with the Fast and Furious stamp set (she choose which vehicles she wanted to use and which colours). 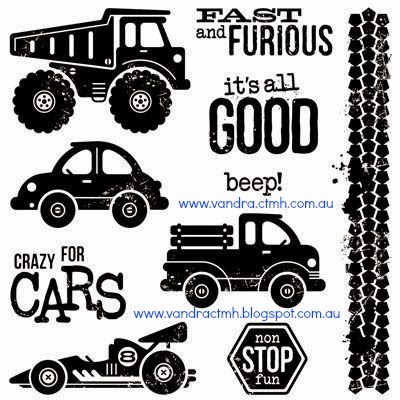 Note: When getting my 6yr old to stamp I put the cars on the 3x3inch block and then realised that putting them diagonally on the block meant she was able to stamp more evenly than if the cars were at one edge of the block. 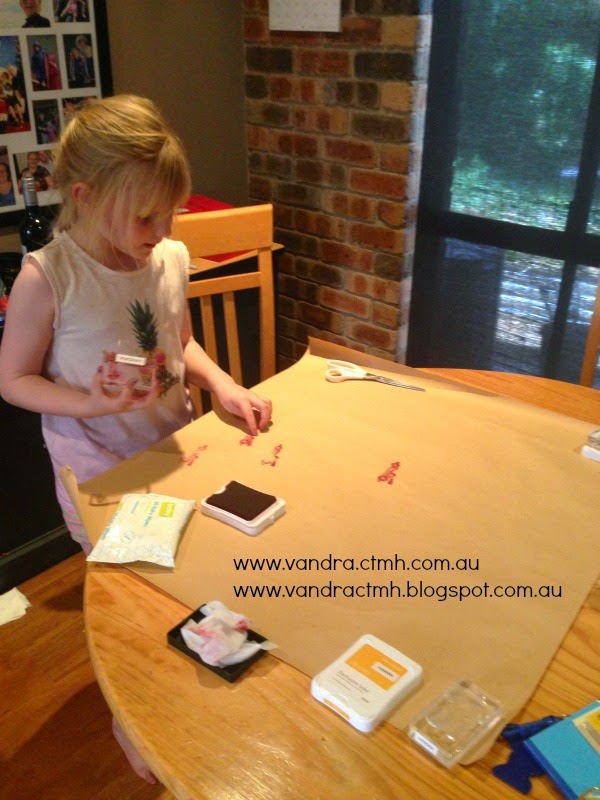 I started the card by deciding to make a Pop-Up card from the Cricut® Artfully Sent Cartridge.
On page 28 there is a pop up card that is designed to have the little aliens on it. I just cut the pop-up insert at 5 inches with the shift key on (as per the instructions) but did not cut the aliens :)

I picked a blue cardstock from my pile of Whimsy Cardstock Combo Pack and cut out the pop up design. To follow with the recycled brown paper look I chose 12" X 12" Kraft Cardstock to create the outside of the card and stamp the three matching vehicles as my daughter had chosen for her paper. 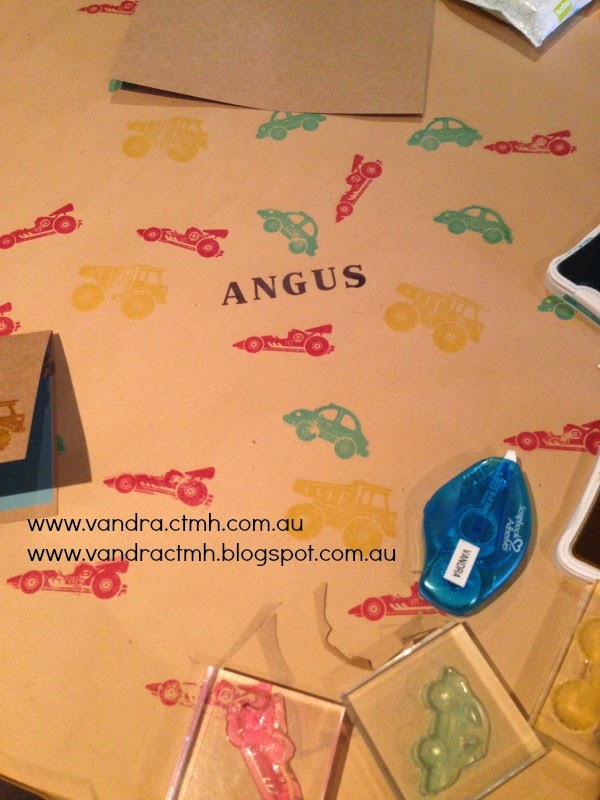 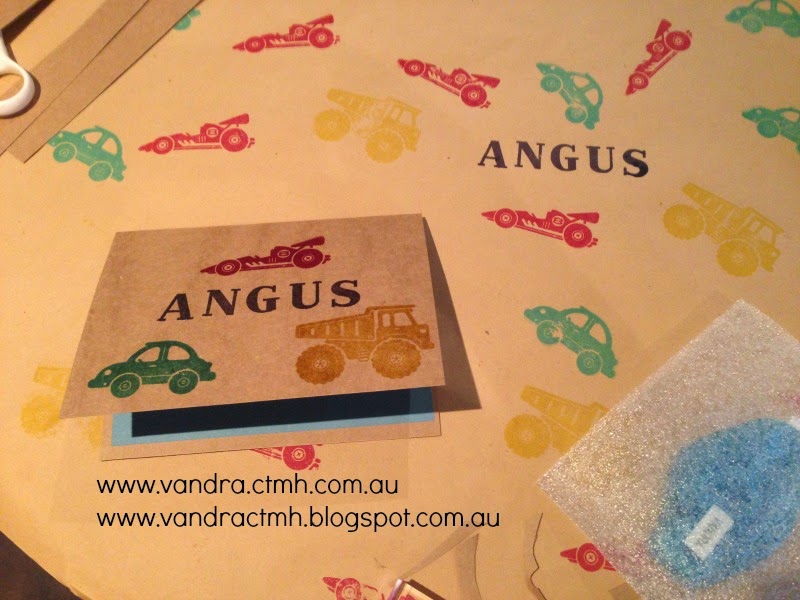 After I had stamped on the front of the card with the same colours as the wrapping paper, I stamped one set on scrap Kraft Cardstock and cut them out, leaving the bottom of the cut out stamps fairly flat for the pop-up. 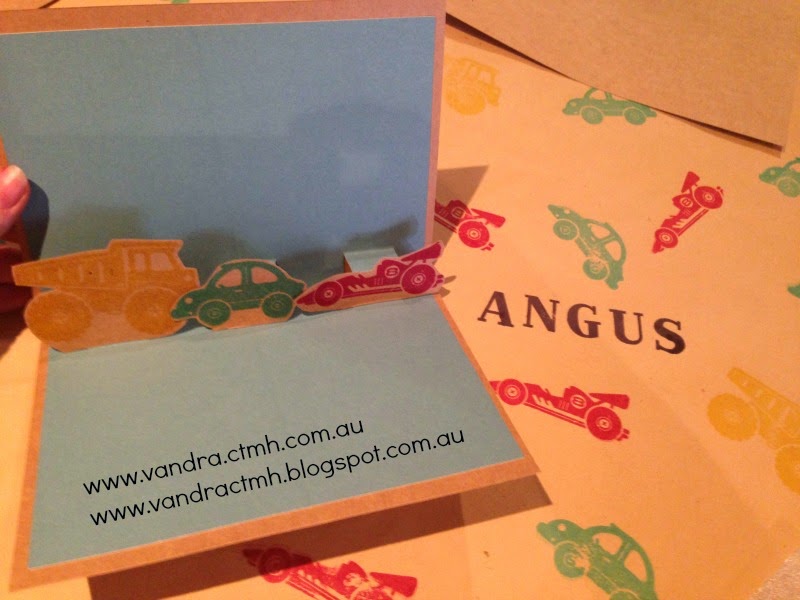 I stuck on the vechicles on the pop up sections of the card with 3L® E-Z Dots® Adhesive and used that same adhesive to stick the insert down to the outer card. 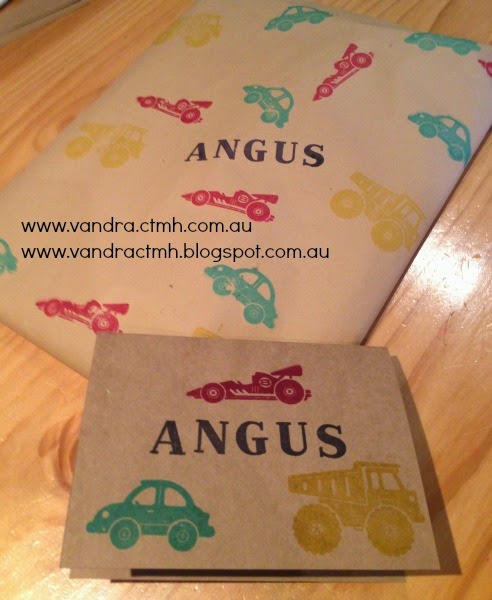 I was very happy with the finished product and think that it made a nice co-ordinated personalised gift wrapping. I hope I have given you some inspiration for your next gift giving opportunity.

I was originally inspired to make wrapping paper when a friendly sister consultant Laura Beacham shared some cute paper she had made with a matching card using the cutest Love Ya Silly stamps and the Operation Smile Fundraiser stamp set You're the Bomb to make the balloon (turning the bomb upside-down). She used the paper Paper Fundamentals Adventure Assortment and 12" X 12" Black Cardstock with Honey Exclusive Inks™ Stamp Pad and Black Exclusive Inks™ Stamp Pad.

Thanks Laura for permitting me to show your cute work on my blog, I love your little cute party alien/monsters.

5 Years with Close to My Heart